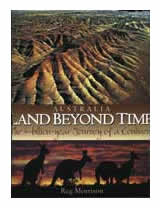 Australia is the Earth’s time capsule. The evolutionary milestones embedded in its rocks and in the genes of its modern plants and animals form an unparalleled archive that extends over 98% of the planet’s existenc

Lavishly illustrated with more than 300 of the author’s photographs, this pictorial biography of the Australian continent outlines 4.4 billion-years of its geological, tectonic and biological evolution, and records a journey of some 100,000 kilometres from its probable birthplace in the northern hemisphere. Borne on giant tides of crustal drift the oldest continental components appear to have circumnavigated the globe and visited both poles—twice.

The data for this extraodinary narrative was drawn primarily from academic sources in universities and museums around Australia, and the technical editing was completed by Dr Alex Ritchie, then Divisional Head of Earth Sciences at the Australian Museum. Its original title was The Voyage of the Great Southern Ark.

The book took four years to compile and resulted in Reg’s appointment as an Associate of the Australian Museum.