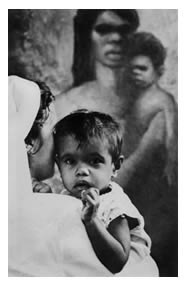 The ‘Stolen Generation’ painting in the background was by Perth artist Allan Baker. The Aboriginal child in the foreground, ‘Peter’, was the first admitted to Ngal-a, a ‘mothercraft home’, when it opened in 1959. Peter was later assigned to foster parents. This picture was used on the front page of The West Australian on 21.3.61. Ngala was one of a number of homes set up to care for orphaned and neglected children who had been ‘taken into care’ when it was deemed necessary for the child’s welfare. This included ‘half-cast’ Aboriginal children as well as some ‘full-bloods’ where local authorities felt that fostering by white parents would give the child a better chance a ‘full life’ in white society. (Photo: Reg Morrison)