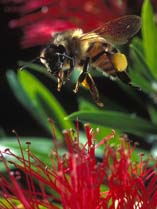 Despite intensive research the collapse of US bee populations remains largely unexplained. Two species of mite have been implicated in some of this carnage, but about a quarter of the cu rrent decline seems unrelated to any specific cause. A variety of agencies have been suggested, but t he multiplicity of potential villains suggests t hat it may, in fact, be due to a degradation of the bees’ immune system. Such a massive extinction of bees in the US, home of GM crops, should be cause for extreme alanm here in Australia, given the cu nrent dete rio ration in agricultural environments, the acceleration of global wanm ing, and the imminent acceptance of genetically modified crops.