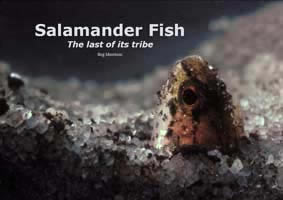 In the clear, cold creeks that slide out of the eucalyptus forests of south-western Australia there lives a little-known fish of extraordinary evolutionary significance. Embedded in its ancient genetic code is a talent for survival that sets it among evolution’s elite. Even in Australia, where genetic antiquities abound, it has few peers. This seasoned campaigner shares its key feature with the greatest survivor of all back- boned animals, the lungfish. Both can breathe air, but unlike the lungfish, the little Salamander Fish can survive without water, not just for an hour or so but for many weeks, sometimes even months. During the droughts that occasionally ravage the continent’s south-west this archaic fish burrows into its creekbed, exudes a mucous sleeping bag, breathes air and switches its metabolism into an ‘idle’ mode known as aestivation. It is a level that barely maintains life and is fuelled essentially by a special-purpose fat reserve that runs like a keel along its underside. The moment its home pool fills once more, the Salamander Fish sheds its mucous sheath, wriggles out of the sand, and resumes its normal aquatic life. The transition from air-breathing aestivator to gill-breathing aquatic predator takes little more than a minute. This unique talent for survival out of water has given the Salamander Fish its common name—a reference to the four-legged amphibian salamanders of Eurasia and the Americas. Bearing the resplendant title Lepidogalaxias salamandroides this ‘living fossil’ seems to be the lone survivor of an archaic family whose range may once have spanned half the world.