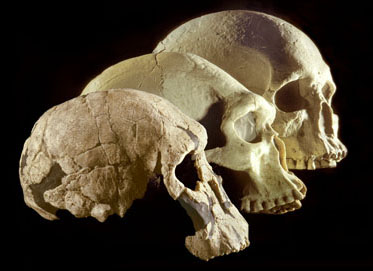 How sad it is that Australia’s very first pioneers remain entirely unrecognised. Almost 50 of their robust, archaic skulls have now been unearthed around the fringes of this continent, yet no museum or university anthropologist is willing to risk their tenure by publicly conceding this fact.

It is generally accepted that the centre skull in this photograph is the same species as the fully modern human skull behind it. Both are Australian and both are about 13,000 years old. Yet the architecture of the centre skull clearly indicates that its evolutionary links essentially lie with the front skull, a 1.8-million-year-old relic from Africa. What is more, the cranial vault of the centre skull (from Kow Swamp in Victoria) is almost twice as thick as that of any living human, and its low, sloping forehead, heavy brow ridges and jutting lower face proclaims its Homo erectus heritage with astonishing clarity.

Download the full article as a PDF or EPUB