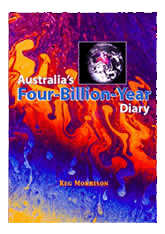 Australia is the time capsule of the planet. No other continent has so faithfully preserved the early milestones in Earth’s geological and biological evolution. The story embedded in its rocks and in the genes of its modern plants and animals recounts most of the seminal events that shaped the Earth’s present biosphere and its opulent biota.

To bring the four-billion-year time scale of this story within easy grasp it has been set against a one-year calendar and presented in 12 ‘’monthly’ instalments. Technically edited by professors Malcolm Walter and John Veevers of Macquarie University, each instalment outlines both the tectonic development of the continent at that time and the coincidental evolution of metabolic or structural features that are now enshrined in the cells of our bodies. In this sense then, Australia’s Four-Billion-Year Diary also presents us with a diary of our own early evolution.

Maps at the back of the book show Australia’s underlying tectonic structure and its early linkage to the supercontinents Pangaea and Gondwana (see Study Aids). Many Australian plants and animals confirm these linkages by the curious distribution pattern of their relatives (see Study Aids).

Finally, the underlying nature of biological evolution is explained with the aid of a Tree-of-Life diagram, and it is set alongside a geological time scale that logs most of the major evolutionary milestones recorded in Australia’s geological strata.